Can i order liquids with nicotine from your australian site?

Unfortunately you can't. Vapoureyes NZ is a completely separate entity from Vapoureyes Australia and you can't place orders on one site that will be fulfilled on the other site. More to the point, it's illegal for an Australian company or individual to sell or otherwise distribute nicotine within Australia, so even if we wanted to we couldn't do it. You can purchase your favourite hardware, 0mg juice and doublers from Vapoureyes Australia.

Why did you open up in nz?

Because of the backwards, anti-science mentality of the Australian government and anti-vaping organisations like the Cancer Council. Their refusal to approach the subject of vaping with honesty, integrity, and a desire to reduce harm means that vaping in Australia is far more difficult and far more dangerous than it has to be.

People who want to switch to vaping have to order raw nicotine from shady foreign websites, often in concentrations that are dangerous to handle, and are expected to know how to safely mix their juice despite having never done it before.

That situation is completely unacceptable. It's not safe, it's not fair, and we want to do something about it.

Vapoureyes NZ is intended to be the best way to introduce new Australian vapers to the community, to supply them with the liquid flavours they want with nicotine already added so they don't have to mess around with syringes or perform calculations or risk poisoning themselves with raw nicotine.

Instead, we'll ship their flavours and a starter kit directly to their door so they can put the kit together, pour in some juice straight from the bottle, and start vaping without having to wonder if they did everything correctly.

Over time, we also aim to introduce a bunch of vaping guides that explain the concepts behind vaping and how to safely use various devices.

Our major goal here is to fundamentally change the way that vaping works in Australia without having to wait for the government to wake up and smell the roasted strawberry.

Vapoureyes NZ and Vapoureyes Australia are separate companies with separate Shopify stores, so your account won't carry over. You don't need to create an account to place an order with us, although you're welcome to do so.

LOYALTY programs | what about my karma points...

Checkout the rules and rewards here

You must be age 18+ to order from us in NZ and Australia. International orders, you must be of legal age to buy vaping products in your country. Check out our terms of service.

We accept all major credit cards through our payment gateway windcave. Or you can pay with BITCOIN!

How much can I order?

As much as you like, there are no limits except for Fanboy which is restricted to one bottle per order. Hey, it's $3 NZD a bottle and we lose money on every one we sell, don't be like this guy. Please keep in mind that orders over $1000 AUD are potentially subject to extra scrutiny at the border or additional duties if importing into Australia.

How fast is shipping?

If you're in Australia, pretty damn fast. From the moment we process your order to the time your parcel arrives in Australia is typically less than 24 hours. At that point, NZ Post hands the parcel over to Australia Post and it takes Australia Post anywhere from 2 to 6 business days for it to show up on your doorstep (longer for regional and rural areas.)

We also offer a express courier service to Australia which often produces delivery times of 2 to 5 business days for major metropolitan areas, and slightly longer for rural and regional areas.

For comprehensive information about how shipping works and our expected delivery timelines, check our shipping information page.

Where are you located?

Our production facility is in the beautiful town of Hastings, situated in Hawke's Bay on the eastern coast of New Zealand's North Island. Vapoureyes NZ is a fully registered New Zealand business, and although we share the same name as our Australian sister company, we're a completely separate legal entity that employs staff in New Zealand and is entirely operated within New Zealand.

All Vapoureyes NZ products are shipped directly from our production facility in New Zealand, we don't keep any intermediary stock in Australia whatsoever.

We've created a world-class e-liquid production facility, including a custom-built ISO-7 certified clean room, so that we can safely and reliably mix, pick, pack and ship all your favourite Vapoureyes liquids with nicotine to every vaper in Australia.

Our ISO-7 certified clean room utilises the highest HEPA filter class, H14, which filters 99.995% of particles in a laminar flow configuration. Access to the clean room is restricted via a pressurised airlock, all entries and exits are monitored and logged, and we follow a set of strict safety and hygiene rules to ensure that every bottle we produce is of the highest quality possible. We know you expect nothing less.

Nicotine Concentrate (100mls): in your home freezer in a secure lockable safety bag
E-Liquids: in your home fridge, sit out for a few hours to warm up to room temperature and shake the bottle vigorously before using

regulations on importing nicotine into australia

As of October 1st, 2021, regulations on importing nicotine into Australia are changing, and Australian vapers will be required to have a valid medical prescription to legally access nicotine e-Liquids.

Technically, on the state level, most Australian vapers have alwaysrequired a prescription to import and possess nicotine. From October 1, the Australian government is simply formalising this requirement on a national level.

This change is following a reclassification from the TGA (Therapeutic Goods Administration) making nicotine e-liquids a Schedule 4 (prescription only) substance late last year.

WHERE CAN I GET A PRESCRIPTION FROM?

You can use online services such as QuitRX.com.au, QuitClinics.comor MyNicotine.com.au to help vapers and those transitioning from smoking to access valid prescriptions for their nicotine needs and maintain their harm reduction strategy.

Alternatively, ATHRAhas created a handy list of other Australian doctors who can possibly assist you with a nicotine prescription.

WHAT HAPPENS IF I PLACE AN ORDER AFTER OCT 1 2021 WITHOUT UPLOADING A PRESCRIPTION AT CHECKOUT?

We will be running business as usual, and will dispatch all orders (whether a prescription is uploaded or not) as normal, at the customers own risk. Please be aware of your national legal requirements.

Prescriptions cannot be backdated and can only be dated from the date of consultation. We recommend getting a prescription as soon as possible to make sure you are covered.

A worst case scenario may be that incoming vape packages will be held by custom officers in Australia, who will then contact you to provide a valid prescription (under the personal importation scheme) for your parcel to be released. If you do not have a valid prescription you may be open to your parcel being destroyed and/or penalties under Australian law, buyer beware.

More information from the TGA.

At this stage we are not setting any limits on purchase quantities. Please keep in mind that orders over $1000 AUD are potentially subject to extra scrutiny at the border - as such, if you require more than $1000 AUD worth of products, we recommending spacing multiple, smaller orders over a few weeks.

According to the TGA (Therapeutic Goods Administration you will only be able to order a three months supply of your prescribed nicotine, with dosage outlined in your doctor's prescription.

Vapoureyes does not enforce these limits / order quantities.

steps involved in legal access to nicotine in australia

The flow chart below illustrates the steps involved in legal access to nicotine in Australia. 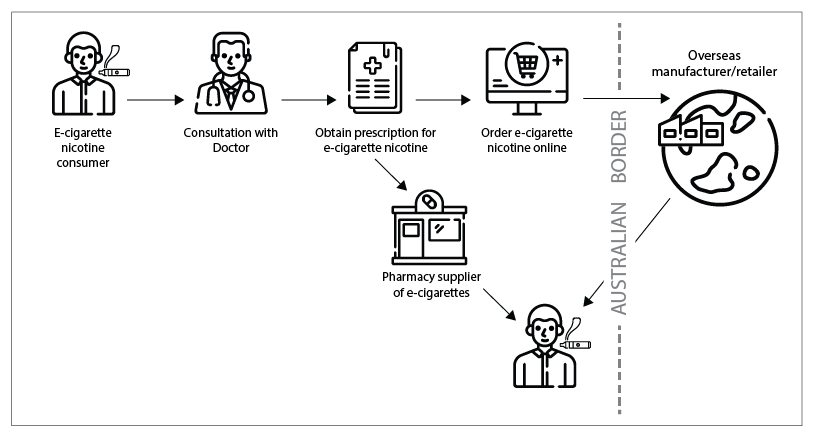 MORE INFORMATION ON PRESCRIPTIONS - AT THE BORDER - SEIZED PACKAGES

Prescriptions can be uploaded on the checkout page. Due to order volumes we cannot add a prescription after the order has been placed.

Vapoureyes will continue to fulfil all orders - the onus is on you to ensure that you hold a valid prescription.

Yes, Australians are legally required to have a prescription in order to receive nicotine by mail.

No,you are not legally required to send us a copy of your prescription.

It’s possible the ABF will intercept your package and ask you to provide proof for your prescription.

It’s possibleyou will be fined if it’s found that you do not have a valid prescription - so make sure you go and get one before placing your order!

While seizure is unlikely, Vapoureyes cannot reimburse you for any seized shipments nor be liable for any fines levied by any authority - the onus is on you to ensure that you are compliant with any and all laws.

Are your products tgo110 compliant?

Nicotine vaping products that are imported via the Personal Importation Scheme must meet the Ingredients requirements in TGO 110, namely:

Australian Border Force officials can stop an import at the Australian border if they suspect it is an unlawful import.

Requirements that donotapply, but every product sold by Vapoureyes NZ features:

This page provides general information only and does not constitute legal advice.